Today, the White House proposed a "Blueprint for an AI Bill of Rights," a set of principles and practices that seek to guide "the design, use, and deployment of automated systems," with the goal of protecting the rights of Americans in "the age of artificial intelligence," according to the White House.

The blueprint is a set of non-binding guidelines—or suggestions—providing a "national values statement" and a toolkit to help lawmakers and businesses build the proposed protections into policy and products. The White House crafted the blueprint, it said, after a year-long process that sought input from people across the country "on the issue of algorithmic and data-driven harms and potential remedies."

"Among the great challenges posed to democracy today is the use of technology, data, and automated systems in ways that threaten the rights of the American public," reads the foreword of the blueprint. "Too often, these tools are used to limit our opportunities and prevent our access to critical resources or services."

A set of five principles developed by the White House Office of Science and Technology Policy embodies the core of the AI Blueprint: "Safe and Effective Systems," which emphasizes community feedback in developing AI systems and protections from "unsafe" AI; "Algorithmic Discrimination Protections," which proposes that AI should be deployed in an equitable way without discrimination; "Data Privacy," which recommends people should have agency over how data about them is used; "Notice and Explanation," which means that people should know how and why an AI-based system made a determination; and "Human Alternatives, Consideration, and Fallback," which recommends that people should be able to opt out of AI-based decisions and have access to a human's judgment in the case of AI-driven mistakes.

Implementing these principles is entirely voluntary at the moment since the blueprint is not backed by law. "Where existing law or policy—such as sector-specific privacy laws and oversight requirements—do not already provide guidance, the Blueprint for an AI Bill of Rights should be used to inform policy decisions," said the White House.

This news follows recent moves regarding AI safety in US states and in Europe, where the European Union is actively crafting and considering laws to prevent harms from "high-risk" AI (with the AI Act) and a proposed "AI Liability Directive" that would clarify who is at fault if AI-guided systems fail or harm others.

The full Blueprint for an AI Bill of Rights document is available in PDF format on the White House website. 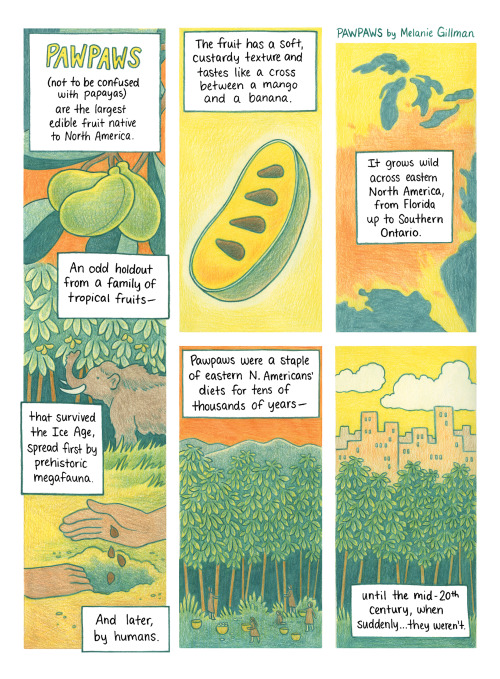 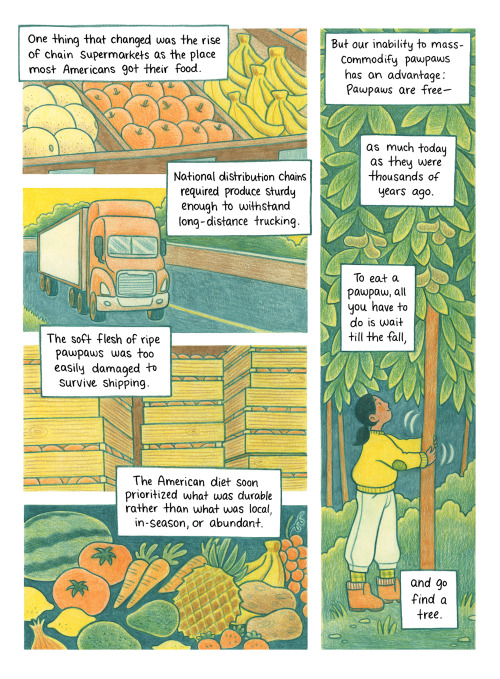 Melanie Gillman in our NATURE issue.

this is a map that shows where you can find pawpaws (as well as many other fruits). just use the filter at the top. rn there are 411 documented pawpaws around the world. some as far as austalia! and what’s great is that this map is community made, so if you know of other spots, you can help others and future foragers by adding it in. you can also leave reviews, so people can know what time a fruit is (or isn’t) ripe and ready for pickin.

Just learned about and foraged pawpaws this year! They’re so good. And such a shock to have a tropical fruit growing in your back yard. Found tons of them on the C&O canal trail.

acdha
reply
I think they’re tasty but my wife doesn’t like the texture to the point that a tree is not in our future
Washington, DC

Why the Florida Fantasy Withstands Reality - The Atlantic
Tuesday October 4th, 2022 at 7:56 PM

New Yorker profiles the creator of NTP and its evolution by Andy Baio
Monday October 3rd, 2022 at 9:42 PM

Pharmacy giants CVS and Walmart will have to face trials over claims that placing ineffective homeopathic products alongside legitimate over-the-counter medicines on store shelves deceives consumers into thinking that the pseudoscientific products are akin to evidence-based, Food and Drug Administration-approved drugs.

The claims come from the nonprofit organization Center for Inquiry (CFI), which filed nearly identical

against CVS and Walmart in 2018 and 2019, respectively, to try to boot homeopathic products from pharmacy aisles for good. CFI claimed that deceptive placement of the water-based products violated the District of Columbia Consumer Protection Procedures Act (CPPA).

Two lower courts initially dismissed the lawsuits. But, in a unanimous ruling last week, a panel of three judges for the District of Columbia's highest court overturned the dismissals in a consolidated appeal, allowing the trials to move forward.

CFI may need more evidence to prevail during the trial, Senior Judge Phyllis Thompson wrote on behalf of the panel. "But, at this juncture, we cannot say that it is implausible that a reasonable consumer might understand [CVS and Walgreen's] placement of homeopathic products alongside science-based medicines as a representation that the homeopathic products are efficacious or are equivalent alternatives to the FDA-approved over-the-counter drugs alongside which they are displayed."

As longtime Ars readers know, homeopathy is a debunked pseudoscience that dabbles with toxic substances intended to be diluted into oblivion. The practice rests on two nonsensical concepts: that a toxic substance that produces the same symptoms as a disease can be used to cure that disease (like cures like); and that the therapeutic potency of a substance increases with more and more ritualistic dilution, even far beyond the point at which not a single atom of the starting substance remains (the law of infinitesimals). In fact, some homeopaths believe that water molecules can have "memory" of substances.

At best, homeopathic products are watery placebos. At worst, they're poorly diluted toxic potions. The latter isn't just a hypothetical. In 2017, the FDA confirmed elevated levels of the toxic substance belladonna (deadly nightshade) in homeopathic teething products intended for infants. The FDA's finding followed reports of 10 infant deaths and more than 400 illnesses connected to the products.

As such, consumer and advocacy groups, such as the CFI, have long railed against the sale of homeopathic products. And the CFI doesn't mince words. "Homeopathy is bunk," the organization wrote regarding its lawsuit against Walmart. "All evidence demonstrates that it doesn't work at any level above that of a placebo. And it can't work, unless every understanding of science we have is incorrect." But, placed alongside legitimate medicines in pharmacy aisles, like those in Walmart and CVS,  they are "peddled to an unsuspecting public as a cure for everything from ear aches to asthma."

In the two lower DC courts, the claim that the products' placement in stores could mislead consumers about their efficacy gave judges pause. The judges argued that the placement on shelves with real medicine didn't "constitute an actionable 'representation' as to efficacy" in regard to violating the CPPA.

But the appeals court judges disagreed. They noted that courts in the past have found that such non-verbal cues and imagery may indeed be considered misleading to consumers. For one example, they pointed to a 2017 case in which obsolete motor oils were sold on the same store shelf as non-obsolete motor oils. When the defendants tried to have the case tossed for "failure to recite a cognizable deceptive practice," the federal district court dismissed the motion, suggesting that it considered the product placement a potentially deceptive practice. That was even despite the fact that the obsolete motor oils carried a warning on their back labels that said the oil "is not suitable for use in most gasoline powered automotive engines built after 1988."

Further, the panel argued that it's plausible that a "reasonable consumer" could be misled by homeopathic products' placement near real medicine. They noted earlier court rulings that determined that a "parent walking down the dairy aisle in a grocery store, possibly with a child or two in tow, is not likely to study with great diligence the contents of a complicated product package, searching for and making sense of fine-print disclosures...  Nor does the law expect this of the reasonable consumer."

The panel also quoted a statement from the Federal Trade Commission on homeopathic products, which warned that even carefully read package labeling saying that the product is "based on traditional homeopathic theories" might not signal to consumers that the product is bunkum… "[M]any consumers do not understand what homeopathy is," the FTC wrote, thus, "the Commission does not believe that such a statement alone would adequately put consumers on notice that a product's efficacy claims are not backed by scientific evidence, and could, in fact, enhance the perceived credibility of the claim."

Overall, the panel concluded that CFI's "factual allegations plausibly support an inference that, through their product placement practices, Walmart and CVS mislead consumers into believing that homeopathic products are equivalent alternatives to FDA-approved over-the-counter drugs."

In a statement, CFI Legal Director Nick Little cheered the ruling. "The Court of Appeals rightly recognized that giant retailers can't just deny responsibility for how they present what are fundamentally worthless products. It's a huge victory for consumers and their right not to be misled." Little said the CFI would continue to fight to stop national retailers from misrepresenting homeopathic products. "They've given us the chance to prove that these retailers are defrauding consumers," Little said of the ruling. "Now it's up to us to do that."

A spokesperson for Walmart meanwhile, told Reuters that the company disagreed with the ruling. "We are continuing to review the Court's decision and weighing our options for further appellate review," the spokesperson said in an email.

They just put the fake products there as a form of satire, a critique of our medical system.
Earth, Sol system, Western spiral arm